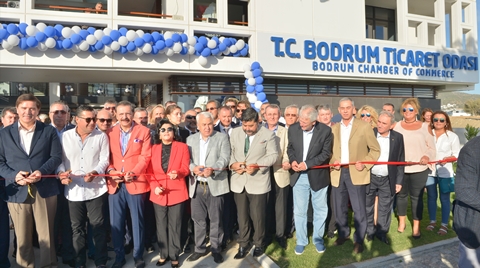 Hisarcıklıoğlu pointing out that Bodrum Chamber of Commerce is an accredited chamber - the first accredited chamber title in Muğla as well as the third accredited chamber in the whole Aegean region, congratulated the Bodrum Chamber of Commerce on its work for making strategic plans, acquiring the first support from the Development Agency and producing the most projects, making the first workplace inventory in the region, establishing a private employment agency and opening a visa office. He reported that the application for the Geo-Marker for the Bodrum Mandarin was carried out with the support of the Chamber and that it has carried out the activities in tourism to be proud of.

Stating that he is hopeful for the future of Turkey, the TOBB President said, “Let's maintain our unity and solidarity. Let’s not alienate each other. We have nobody but each other. We will meet under a common mind. We will think differently, but we will in unison.”

Muğla Governor Esengül stated that Civelek, Muğla, contributed not only to the regional economy but also to the country's economy.