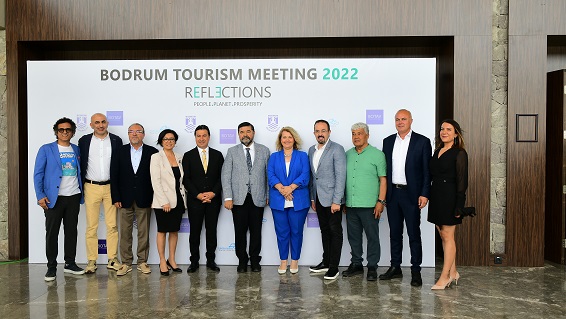 WE TALKED ABOUT THE FUTURE OF BODRUM AT THE TOURISM MEETING
Dear Members,

Bodrum Chamber of Commerce (BODTO) President Mahmut Serdar Kocadon participated in Bodrum Tourism Meetings organized by Bodrum Promotion Foundation (BOTAV) and Mediterranean Tourism Foundation (MTF). During the meeting, which also included Ibrahim Akkaya, Deputy Chairman of the Board of Directors, Hafize Dilek Oz, Chairman of the Professional Committee of No. 4, and Ali Şir Sahin, Member of the Professional Committee of No. 5, the necessary things to be done for the welfare of Bodrum were discussed.

In the meeting held at the Ramada Hotel on Monday 9th, President Kocadon drew attention to the socio-economic changes of Bodrum has undergone over the past 20 years. 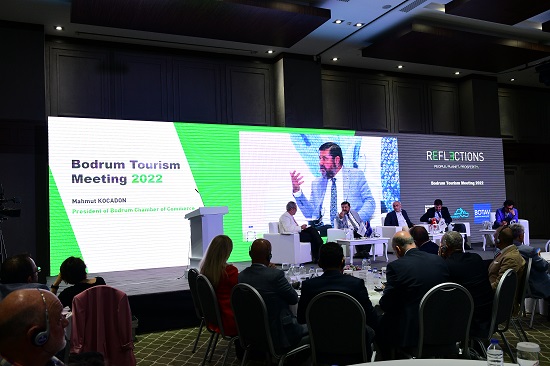 “Over the past 20 years, the population of our district has increased from 99,000 to 187,284 according to the address-based population registration system data, and according to this number, it is trying to get a share of the budget. However, it should be noted here that today the resident population of Bodrum is actually nearly 400 thousand. Our district should receive a share of the budget according to this number and its infrastructure should swiftly be improved." The Head of the Parliament said these words and added that the number of banks has increased from 23 to 60 in the last 20 years.

“It is clear from these figures that the speed of construction of our district is more than the speed of tourism development. This is worrying for us because Bodrum is on the way to becoming a city by the sea, rather than being a tourism city. Moreover, there is no serious increase in the number of foreign visitors in our district."Kocadon said these and mentioned the necessity to carry out activities to develop tourism in the region.

“By 2022, we are still talking about the shortcomings of the lower and upper structures, the negative impact of construction on Bodrum. After focusing on completing all our shortcomings as a vision and embracing the real contribution of tourism to our economy, perhaps we will really be able to build the future of tourism." said the President of BODTO. Indicates; that in order to always see Bodrum as the leading leader and brand on the tourism pages, it is necessary to consolidate the foundations of sustainable tourism on the basis of the public and private sectors.

He completed his words by saying, “When it comes Tuscany of the Italians to the Mediterranean Riviera of the French, let's not blunt the riches that are at hand as a basement. Beyond the tourism future, we must implement sustainable green tourism with the right planning in cooperation with the social and economic development of Bodrum. As a result, we should note that tourism is no longer the tourism we used to know, but Bodrum should move towards planned, supervised, sustainable tourism and a future with a quality of life, rather than going without knowing the value in its hands."