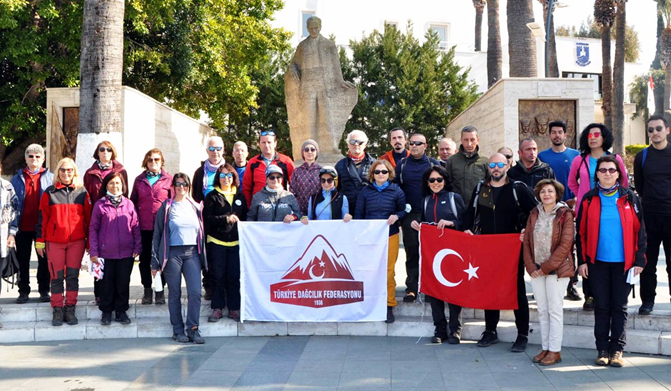 Within the context of the promotion of Bodrum Leleg Road which was laid the base by Bodrum Chamber of Commerce collaborating with Bodrum Nature Sports Club between the dates 25-27 March, 2022 Turkey Federation of Mountaineering members walked the Bodrum Leleg Road.

Starting with the ceremony happening in the Bodrum Municipality Stage on 25 March Friday sportsmen started walking from the beginning point Etrim in the program. Sportsman who camped 2 days completing the rote approximately 46 kilometers on 27 March Sunday in front of Bodrum Chamber of Commerce finishing their walk.

District Governor of Bodrum Bilgehan Bayar also visited the camp area and sportsman people who are coming from different parts of Turkey with Bodrum Chamber of Commerce President of Assembly İlhan Ersan and President of Governing Board Mahmut Serdar Kocadon, in front of the building of Bodrum Chamber of Commerce coming together with the walk-lovers.

Bodrum Chamber of Commerce President of Assembly İlhan Ersan while thanking all the clubs and the visitors for their attendance, invited everyone to live this experience in Bodrum Leleg Road. As for BODTO Chairman of the Board of Directors Mahmut Serdar Kocadon thanked to Turkey Federation of Mountaineering’s for including us in their yearly plan of activity. He wanted the 30 people who walked on the Bodrum Leleg Road to share their experiences with other sportsmen. 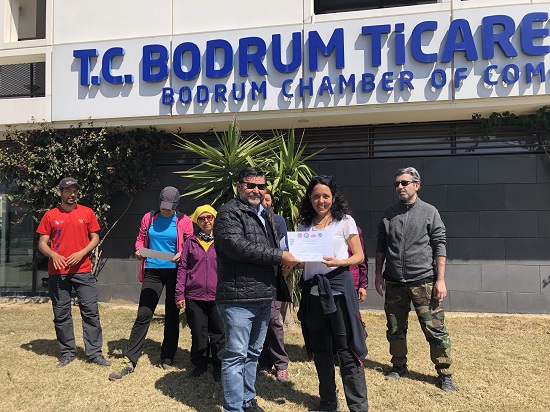 Turkey Federation of Mountaineering President of Governing Board member Mehmet Bakır and Technic Director Osman Kalaycıoğlu stated the fact that Bodrum Leleg Road’s variable scales according to the difficulty levels, enable Bodrum’s different sides to be experienced with nature and history. They said that the marking and planning of Bodrum Leleg Road work are rather good.

Turkish Mountaineering Federation Muğla Provincial Representative Burhan Yusuf Taş, on the other hand, a total of 188 parkour has been gained to our state with the financing of BODTO and GEKA. As BODOSK, which we made it happen for the first time this year and which we realized with its national application with three goals that will end in Kazderesi to continue on the Etrim, Tangela Mountain, Kışla, and Pınar route; our goal is to “promote the nature, history, and beauties of the region. We aim to bring these beauties together with those who give hope to mountaineering and nature sports, as well as the continuation of the targets aimed at similar targets indoors, which is planned to be introduced on this date, is brought to tourism and nature is intertwined with culture”.

Son Haberler
All
STORIES OF BODRUM
STORIES OF BODRUM
AEGEAN EXPORTATION MEETINGS HAPPENED IN BODTO
WE TALKED ABOUT THE FUTURE OF BODRUM AT THE TOURISM MEETING
BODTO MEMBER RETURNED FROM DUBAI WITH AN AWARD
BODRUM TANGERINE WILL BE ON METRO MARKETS
WE ARE BUILDING BUSINESS DEVELOPMENT WITH INDIA
WE DISCUSSED THE FILM INDUSTRY IN THE INTERNATIONAL ARENA
TABLETS FOR 30,000 STUDENTS FROM TOBB
WE CONTINUE OUR INTERNATIONAL NEGOTIATIONS
OUR INTERNATIONAL COOPERATION CONTINUES
FIRST ONLINE MEETING WITH INDIAN BUSINESS GROUP CHMABER OF COMMERCE
RCIKLIOĞLU ATTENDED THE JOINT MEETING OF MUĞLA PROVINCIAL/COUNTY CHAMBER
EU CHAMBER PAIRING PROJECTS INTRODUCED AT TOBB
TSE OBSERVATION AUDITING
OPPORTUNITIES FOR TURKEY IN THE DIGITAL AGE
INTERVIEWS WITH THE MINISTER OF TOURISM
HİSARCIKLIOĞLU MET WITH SECRETARIES GENERAL
CREDIT SUPPORT FOR SMEs
AEGEAN REGION CHAMBERS / COMMODITY EXCHANGES PRESIDENTS MET AT TOBB