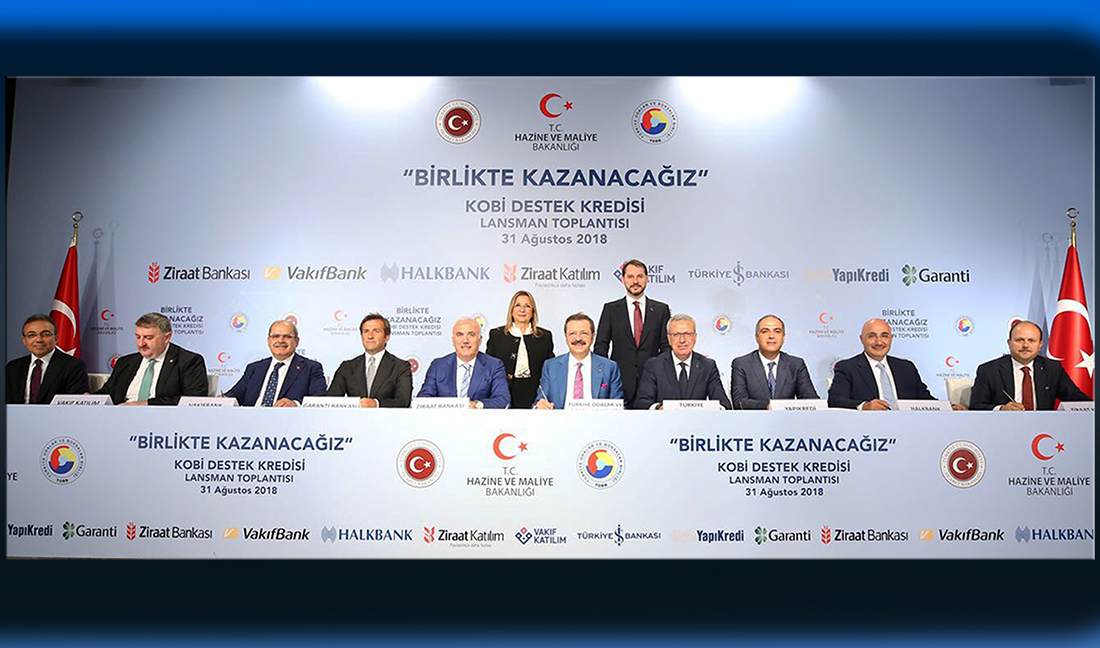 TOBB President M. Rifat Hisarcıklıoğlu pointing out the importance of the credit support considered a continuation of the “Respite Credits” which was viewed as an innovation in finance, at the “We Will Win Together” launch meeting, said, “We are pushing ahead with the cooperation of 8 banks. We are moving forward more strongly. This is an important project in which the real sector and the finance sector are forming a strong partnership.”​

At the “We will win together: SME Support Credit Promotion” launch meeting organized with the participation of TOBB President Hisarcıklıoğlu, Treasury and Finance Minister Berat Albayrak and Trade Minister Ruhsar Pekcan, statements in support of Turkey's economy and SME Support Loan.

M. Rifat Hisarcıklıoğlu stated that SME Support Loan will provide significant financing support to SMEs and said, “Normally, if you deposit your money in your bank today, you get 22-23% deposit interest from the bank and unfortunately SMEs who want to use loans are subjected to interest rates over 30%; but if you use the Support Loan you will pay 1.85% per month and 22% per year, meaning that SMEs will be able to borrow around the deposit interest rate or 8-10% below the normal loan interest rates.”

Hisarcıklıoğlu stated that parties in the public sector, real sector and finance sector have come together to provide SMEs' quality financing support. “In fact, this is the continuation of the ‘Respite Credits,’ called an innovation in finance by the President of Turkey. We have provided 5 billion TRY for 2017 and 7.5 billion TRY for the first half of 2018 with our Respite Credits. This race to provide support we started last year with two banks, today, with the support of the Turkey Banks Union (TBB) Chairman Huseyin Aydın, continues with 8 banks. We are now walking stronger. First of all, this is an important project building strong bonds between the real sector and the finance sector.”

Hisarcıklıoğlu, pointing out that the architects of SME Support Credits are Pekcan and Albayrak, explaining that Minister Albayrak is leading the ministry through a very difficult period, went on:

“Since becoming Treasury and Finance Minister, Minister Pekcan has been in consultation with the private sector, putting us first and seeking solutions to our problems. Minister Pekcan has taken on the entire burden of the real sector with the new structure of our Ministry of Trade.

Whether it is for merchants, industrialists, tradesmen, exporters or SMEs, she is working to solve our problems day and night. She is a very successful woman entrepreneur from our community. Today we are with two of our ministers to reduce the credit costs for our SMEs. At a crucial time, we are re-launching the SME Support Credit with the real sector and the finance sector working hand in hand. We are here as TOBB, Ziraat Bank, Halkbank, Vakıfbank, İş Bank, Yapı Kredi Bank, Garanti Bank, Vakıf Participation, Ziraat Participation and Credit Guarantee Fund (KGF). I would like to thank all the bank general managers here for their leadership. I am also pleased to welcome the newly joined İş Bank, Yapı Kredi Bank and Garanti Bank.”

Hisarcıklıoğlu explained that new loans of up to 10 billion liras will be provided to SMEs within 2-3 months with the support of chambers and stock exchanges. He gave the following information about the loans:

“The system is very simple in this project. From Monday, our member SMEs will be able to apply to the bank branch they work with the membership documents from their chambers or commodity exchanges. Our SME Support Credit will be 1.85% per month. So the annual interest will be 22%. A member can use a maximum of 200 thousand TRY credit and will not pay principal for 6 months, followed by 12 equal installments for a total 18 months. 85% of the credits will be covered by Treasury-backed KGF bail. In other words, our SMEs will not have a serious collateral burden.

Let me simply: Normally, if you deposit your money in your bank today, you get 22-23% deposit interest from the bank and unfortunately SMEs who want to use loans are subjected to interest rates over 30%; but if you use the Support Loan you will pay 1.85% per month and 22% per year, meaning that SMEs will be able to borrow around the deposit interest rate or 8-10% below the normal loan interest rates.”

In other words, we continue to innovate financially in the words of our President. With this project, our SMEs will benefit, Turkey will benefit. Turkey, despite those who targeting Turkey’s economy, will come out of this period stronger. The unity of power around this table will accomplish this.”

Stating that TOBB will continue to work on behalf of the Turkish private sector, as it has in employment mobilization, Respite Credits and domestic automobile, Hisarcıklıoğlu said that those who invest in Turkey always win.

Hisarcıklıoğlu said, “As Turkish traders and industrialist we will what we know best.”

“We will work more, produce more; we will win, our employees will win, Turkey will win. As long as the unity of power around this table exists we will accomplish many great works. We will win together “

Trade Minister Ruhsar Pekcan stated that it has been noticed that there are opportunist price increases and hoarding, not in line with the spirit of solidarity, hoping to benefit from temporary fluctuations in the financial markets. “As the Ministry of Commerce, we will continue to take precautions to prevent the deterioration of the market.”

Pekcan said that this loan, which supports the backbone of the economy, will be an opportunity for new entrepreneurs who have new ideas and want to succeed, “I am sure we will get the positive results of this loan soon.”

Treasury and Finance Minister Berat Albayrak said, “While we focus on the objectives we set out for our economy, we must not forget that we are in a process that we must be constantly vigilant with all our institutions.”

Albayrak, speaking at the introduction meeting stated that it is important that the slogan is, “Win Together.” “We will win against the economic attacks targeting the nation's prosperity in the end.”

Albayrak stated that all institutions, NGOs, real sector and especially banks are in solidarity in this struggle.

Stating that the Turkish banking system, which receives its power and support from the economy, is in a healthy and balanced state, Aydın noted that the banking sector works according to internationally accepted regulations.

Following the speeches of Hisarcıklıoğlu, Aydın, Pekcan and Albayrak, the signing ceremony was held for the “We Will Win Together: Promotion of SME Support Credit” meeting.

Pekcan and Albayrak witnessed the agreement signed by Hisarcıklıoğlu with the general managers of the banks supporting the SME Support Credit. The meeting ended with photo shoots.