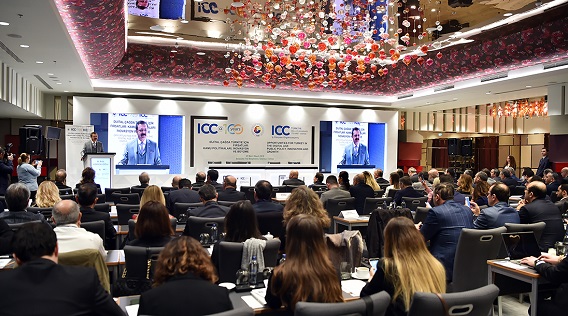 OPPORTUNITIES FOR TURKEY IN THE DIGITAL AGE
Dear Members,

Organized in cooperation by the Union of Chambers and Commodity Exchanges of Turkey (TOBB), the International Chamber of Commerce (ICC) Turkey National Committee, the “Opportunities for Turkey in the Digital Age: Public Policy, Innovation and Growth” Conference was held in Istanbul.​

TOBB President M. Rifat Hisarcıklıoğlu stated that digital technology offers a new opportunity, “It changes business processes, affects production and employment. On the other hand, new technologies also reduce employment. But thanks to increased productivity, new jobs and professions emerge. Unfortunately, we are yet to fully come to grips with the situation. The world is using the digital space for business, and most of us are still in the business of gossip.”

Hisarcıklıoğlu pointed out that there are 326 unicorns on a global scale. “Among them, there are Nigerians, Colombians, Estonians, Portuguese, Singaporeans. But no Turks. I was in Indonesia recently. Per capita income is half as much as ours, but there are 3 startup companies with market value in excess of 1 billion USD. In Turkey we have seen no unicorns. This list of unicorns is the best indication that we have not been able to follow the change in the world since 2010. Digital transformation is inevitable. It's going to be good or bad for our lives, we don't know that yet. But the future is certain. So instead of mystifying digital transformation, we must try to understand it.”

The TOBB President, explaining that his generation is behind in catching the industrial revolution, said, “Yes, after 1980, thanks to the late Özal, we learned to open to competition. We were able to raise our industry and exports from low technology to medium technology. But we could not show the same success in the transition from medium to high.”

Stressing that, ten years ago, there was no such thing as social media, Hisarcıklıoğlu said that there are now thousands of social media experts.

Stating that the need for brick-and-mortar stores is decreasing, Hisarcıklıoğlu said, “But there is a need for building a chain of large brick-and-mortar logistic centers, and artificial intelligence experts, cyber security team to organizing all of these. That's what's happening. So it is necessary to leave yesterday to yesterday and look forward. As Steve Jobs said, ‘The most important invention of life is death.’ The dead company is a sign of life, making room for the new. The persisting like a zombie with the support of the government, preventing the entry of new companies into the market is bad. This is what our public administration in Ankara needs to learn. In the transition to a digital economy, the national education system presents another problem that urgently needs solving. Because, no matter how the technology develops, it is the person who will manage, construct and develop it. First of all, we need a new understanding of education to increase children's adaptability.”

- “Turkey must overcome its stiffness and immobility in this race”

Stating that TOBB, with the Ministry of National Education, has achieved an important first, Hisarcıklıoğlu said, “We started to integrate vocational education with the real sector. Initially, 1 vocational high school in each province will be renewed and modernized by our Chambers and Commodity Exchanges. Thus, we will start a new and dynamic vocational training model prepared according to the qualities demanded by the markets.”

Hisarcıklıoğlu also said that women and young entrepreneur boards are working with important technology companies in the world, providing coding and e-commerce trainings to thousands of women entrepreneurs in 81 provinces.

Stating that they organized a Digital Age Workshop for children at TOBB University of Economics and Technology, Hisarcıklıoğlu said, “If we can handle the training, then we need inform our companies of the threats and opportunities. For example, in the real estate business, an entrepreneur takes images of places, markets them using virtual reality VR goggles, and rapidly increases their sales. Third, we need support systems for new technologies. The public sector can provide direct support to the company and offer support to consumers using public policies, for example, it can direct consumers towards vehicles that pollute the environment less. The choice between companies and products are made by a large number of consumers who receive support.”

Hisarcıklıoğlu stated thatTurkey must overcome its stiffness and immobility in this race and that, while waiting for technology to develop, they are missing out on opportunities.”

Hisarcıklıoğlu stressed that there is also the matter of regulation, “Companies operating in the digital market are being discussed not only in terms of the value they produce, but also in terms of negative economic and social impact they may cause throughout the world and Turkey. Some practices may infringe on competition. It is critical that the regulatory authorities, which aim to ensure discipline and order in the markets, prevent this. Another important expectation of the private sector is that the practices of the public institutions that disrupt the fair competition are taken to the agenda of the Competition Board. To sum up, a competition policy in line with the spirit of this new age needs to be developed. The International Chamber of Commerce (ICC) has made global contributions to the development of these policies through the Competition Commission, known as the most effective non-governmental organization in the field of competition law, along with the regional and international Competition Network - ICN.”

Stating that the International Chamber of Commerce (ICC) is the largest business organization working to increase trade and investment in the world, the TOBB President said, “Its core business is to create business rules that aim to remove conflicting practices across countries and the globe. Within this framework, by gathering private sector representatives from different countries under one roof, it has become a reference institution for increasing trade in the world and removing obstacles to trade. ICC is active in both developed and developing countries and it is the only business organization in the United Nations acting as our voice. Through its members in more than 100 countries, it represents more than 45 million companies and more than 1 billion employees. In our country, the Union of Chambers and Commodity Exchanges of Turkey has undertaken the establishment of the ICC Turkey National Committee and conduct its activities. ICC Turkey National Committee, within the 92 countries of the ICC, is among the most active working committees. Our Committee also took part in the preparation of a new version of the international standard rules, indicating the rights and obligations of INCOTERMS-2020, the exporters and importers of international trade, which is closely related to our private sector. ICC Turkey focuses on arbitration, banking, commercial law, digital economy, intellectual property, competition, tax policies, customs and trade facilitation. In all these issues, it has ensured the preparation of international rules and has protected the rights of our business world in supranational institutions such as the World Trade Organization.”

President of the Competition Authority Dr. Ömer Torlak stated that Turkey can close distance with the competition with effort.

Torlak pointed out that digital technologies are becoming more widespread, and that the digital age has led to a period in which the human mind is hard to predict.

Ömer Torlak said, “And so, while some are losing jobs due to changing times, the digital economy is seeing the emergence of new jobs. Advanced economies today are discussing living wages instead of just unemployment pay.”

Professor Dr. Ömer Torlak noted the need to catch up to the information society and that the young population of Turkey is an advantage, noting that developments are changing the DNA of economic activity.

Torlak said, “Our main aim is to protect competition and consumer welfare in a world where digital transformation is very fast, to prevent the creation of artificial entry barriers and to contribute to the creation of a market environment which allows young entrepreneurs to bring about new ideas and technologies for innovation. We think that we can bring the most important aspects, dynamism and innovation of digitalization to our country's economy by opening the way for competition.”