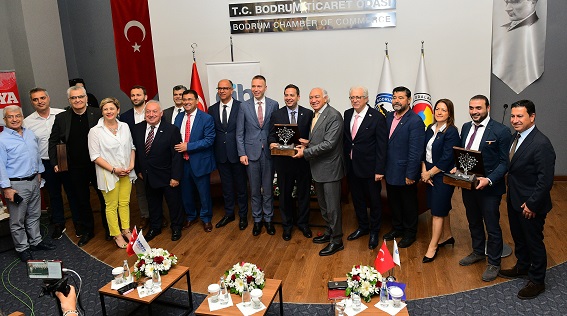 Aegean Exporters' Associations (EIB)and World Newspaper Organization with Bodrum Chamber of Commerce being the host at 16 May Monday “Aegean Exportation Meetings-Muğla” event has been arranged. At the meeting, which took place with the intense interest in the Muğla protocol, while the Muğla export champions are awarded, with the attendance of the Aegean Exporters' Associations and World Newspaper Organization Presidents, a panel was held on the export of the region and the economy of our country.

BODTO Chairman of the Board of Directors Mahmut Serdar Kocadon, who gave the opening speech of the event, said: “I think it will be important to establish an Association of Service Exporters based in the Aegean Region due to the contribution of the chimney-free industry to the economy. I believe that a step should be taken in this regard.” He mentioned the contribution of the Aegean Region to exports. Chairman Kocadon, while providing the information that the most important sectors of the district's economy are construction and tourism, said, “Aquaculture is also one of the sectors we are ambitious for. Our 197 members are also members of the EIB. We have a wide range of products from homemade beer to furniture that are products of export. Just as textiles in Denizli and machinery in Aydın are serious export items, yacht manufacturing in Bodrum was a major foreign currency item for a while. Hopefully, we will make a serious breakthrough in this regard from now on. Marble is at the forefront of export in Muğla. We are proud of the fact that we have Kılıç Aquaculture, the leader of Turkey in Water Exports, among our members. 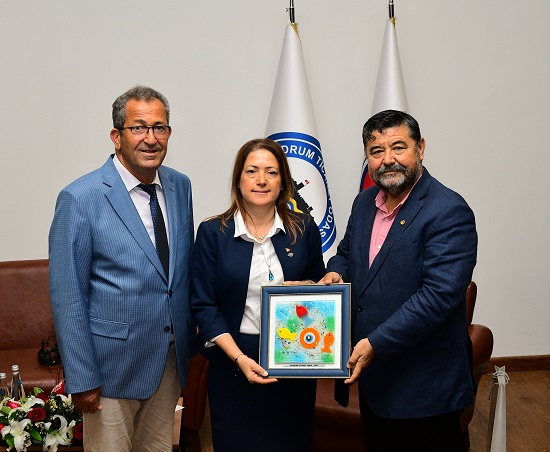 Muğla, which is one of the tourism centers of Turkey, has achieved an export of 774 million dollars in 2021. While Muğla aims to export $ 1 billion in 2022, the Aegean Exporters' Associations organized the “Stars of Muğla Export Award Ceremony” for the top 5 exporters of Muğla, which brought $ 555 million in foreign currency to Turkey in 2021.

“The aquaculture sector has placed an embargo on the top three.”

KLC Food Products, one of the Kılıç Holding companies that have maintained its first place in Turkey in the aquaculture and animal products sector for many years, became the Muğla export champion.

“Two of the Muğla export champions are from the mining sector.”

The mining sector, which is the second sector that contributed the most to the export of Muğla with $ 106 million in 2021, was represented by two companies in the list of Muğla export champions in 2021.

Eskinazi: "We are expecting $ 1 billion exports from Muğla.”

Speaking at the “Aegean Export Meetings-Muğla” meeting held at the Bodrum Chamber of Commerce, Jak Eskinazi, Coordinator of the Aegean Exporters' Associations, highlighted that Muğla is a city of tourism, agriculture, mining, and exports that unites the Aegean Region and the Mediterranean Region.

Providing information that Muğla increased its export from $ 585 million in 2020 to $ 774 million, an increase of 32 percent in 2021, Eskinazi said, “Our aquaculture sector accounted for 68 percent of the export of our province of Muğla on its own with exports of $ 528 million. Our mining sector was the second sector with the export of $ 106 million, while our fresh fruit and vegetable sector ranked third with the export of $ 44 million. The growth rate of our Muğla's export continues in 2022. April January – April 2022, Muğla increased its exports by 24 percent from $ 220 million to $ 272 million. We expect our exporters from Muğla to cross the $1 billion thresholds this year.”

Expressing that the working capital of exporters has suffered due to increased costs recently, Eskinazi completed his words as follows; “In this process, the need for financing of exporting companies is greater than ever. Turkish Eximbank, our exporter's friend on difficult days, attended our meeting to support you. Turkey aims to export 250 billion dollars by 2022. As EIB, we are trying to contribute $ 19 billion to these exports. Sustainability, digitalization, design, R&Dec are the topics we focus on.” 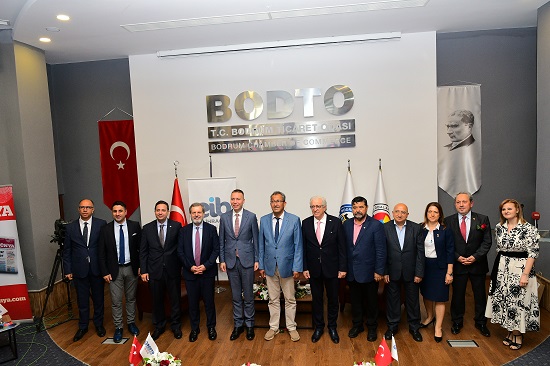 Gulom Timurhan, Regional Director of Türk Eximbank Aegean Region, pointed out that they are in the 8th biggest bank position in the sector which has the largest non-performing loan volume. Recalling that Jul Eximbank provided about 50 percent of cash export loans in the sector with credit support of $ 22.5 billion by the end of 2021, Timurhan said: “We provided $ 3.3 billion in funds from international capital markets in 2021, at a time when pandemic-related uncertainties were affecting the whole world, and we put them at the service of our exporters. At the same time, we are the largest credit insurance company in our country. As of the end of 2021, the number of insured export receivables amounted to $ 23.6 billion. Thus, our support for exports reached $ 46.1 billion in 2021. The number of our exporters who are actively benefiting from the support of our bank has exceeded 14 thousand. At the end of our strategy of spreading export support to the base, the number of SMEs using our bank's services in 2017 was at 60 percent, while in 2021 this figure reached 77 percent. We give priority to SMEs in the use of loans. TL loans are mostly made available to SMEs. We make SMEs use loans at more affordable costs. A new era in export financing has begun with the launch of the Export Development Company, which we have established with TIM, as of March 1. With the surety of this organization, we offer our SMEs the opportunity to use loans with a maximum capacity of 12 months. As part of the protocol that we signed with the KGF, we started to provide loans to our exporters or SMEs operating in foreign exchange-earning sectors with the bail-out of the KGF.”

Emphasizing that Muğla exported 774 million dollars in 2021, an increase of 23 percent compared to previous years, Timurhan said, “As a bank, we provided $ 254 million in support to Muğla exports in 2021, including $ 27 million in cash loans, $ 227 million in receivable insurance for a total of $ 254 million. With the aim of directly contacting our exporters to better meet their needs, which was launched this year in order to see the Diyarbakir Branch Office we provide services in different locations with a total of 23 10 33. We are maintaining close contact with our exporters which cover our provinces and account for more than 90 percent of total exports. In line with the vision and goal of our country for 2023, we launched a strategic transformation program in 2020 to give direction to our bank's export support strategy and to liken our operating system to model country models. In this direction, our bank launched a new website and mobile branch in 2021 in order to provide exporters with a structure that can offer services without office dependence, while software and accelerating the processes of a digital-oriented approach. Our goal is to provide the opportunities of Turkish Eximbank to many more of our exporters and support them in their worldwide competition. We are proud of our country's export record for 2021. We will continue with all our support and strength to reach our 2022 export target of 250 billion dollars.”

After the panel, speakers and panelists were presented with thank you plaques by BODTO Chairman of the Board of Directors Mahmut Serdar Kocadon and Vice President Ibrahim Akkaya.

Son Haberler
All
STORIES OF BODRUM
STORIES OF BODRUM
WE TALKED ABOUT THE FUTURE OF BODRUM AT THE TOURISM MEETING
BODTO MEMBER RETURNED FROM DUBAI WITH AN AWARD
BODRUM TANGERINE WILL BE ON METRO MARKETS
LELEG ROAD HOSTED PROFESSIONAL MOUNTAINEERS
WE ARE BUILDING BUSINESS DEVELOPMENT WITH INDIA
WE DISCUSSED THE FILM INDUSTRY IN THE INTERNATIONAL ARENA
TABLETS FOR 30,000 STUDENTS FROM TOBB
WE CONTINUE OUR INTERNATIONAL NEGOTIATIONS
OUR INTERNATIONAL COOPERATION CONTINUES
FIRST ONLINE MEETING WITH INDIAN BUSINESS GROUP CHMABER OF COMMERCE
RCIKLIOĞLU ATTENDED THE JOINT MEETING OF MUĞLA PROVINCIAL/COUNTY CHAMBER
EU CHAMBER PAIRING PROJECTS INTRODUCED AT TOBB
TSE OBSERVATION AUDITING
OPPORTUNITIES FOR TURKEY IN THE DIGITAL AGE
INTERVIEWS WITH THE MINISTER OF TOURISM
HİSARCIKLIOĞLU MET WITH SECRETARIES GENERAL
CREDIT SUPPORT FOR SMEs
AEGEAN REGION CHAMBERS / COMMODITY EXCHANGES PRESIDENTS MET AT TOBB