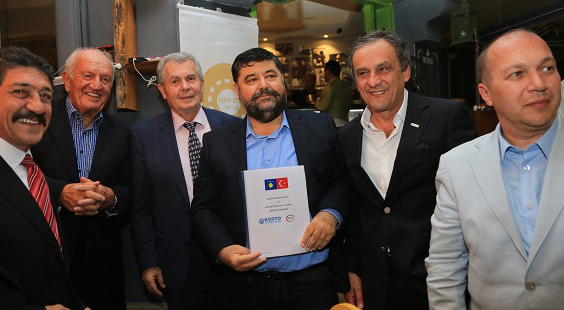 The Trade Delegation from Kosovo participated in the event organized by the Bodrum Chamber of Commerce on Saturday, April 2nd. In the event, a "Goodwill Agreement" was signed with the Kosovo delegation and steps were taken to develop trade relations.

BODTO Chairman Mahmut Serdar Kocadon wished a fruitful cooperation ahead and said “You know, at a meeting we held on Thursday, March 31, we made a business association decision with Prizren and we wrote this in Turkish and English. We are able to carry out all kinds of business associations regulated by the trade laws of Turkey and Kosovo. We have no trouble in that regard. This agreement is a goodwill agreement, business union. I hope this business association is good for all of us. I hope it will be instrumental in profits.”

Son Haberler
All
STORIES OF BODRUM
STORIES OF BODRUM
AEGEAN EXPORTATION MEETINGS HAPPENED IN BODTO
WE TALKED ABOUT THE FUTURE OF BODRUM AT THE TOURISM MEETING
BODTO MEMBER RETURNED FROM DUBAI WITH AN AWARD
BODRUM TANGERINE WILL BE ON METRO MARKETS
LELEG ROAD HOSTED PROFESSIONAL MOUNTAINEERS
WE ARE BUILDING BUSINESS DEVELOPMENT WITH INDIA
WE DISCUSSED THE FILM INDUSTRY IN THE INTERNATIONAL ARENA
TABLETS FOR 30,000 STUDENTS FROM TOBB
WE CONTINUE OUR INTERNATIONAL NEGOTIATIONS
OUR INTERNATIONAL COOPERATION CONTINUES
FIRST ONLINE MEETING WITH INDIAN BUSINESS GROUP CHMABER OF COMMERCE
RCIKLIOĞLU ATTENDED THE JOINT MEETING OF MUĞLA PROVINCIAL/COUNTY CHAMBER
EU CHAMBER PAIRING PROJECTS INTRODUCED AT TOBB
TSE OBSERVATION AUDITING
OPPORTUNITIES FOR TURKEY IN THE DIGITAL AGE
INTERVIEWS WITH THE MINISTER OF TOURISM
HİSARCIKLIOĞLU MET WITH SECRETARIES GENERAL
CREDIT SUPPORT FOR SMEs