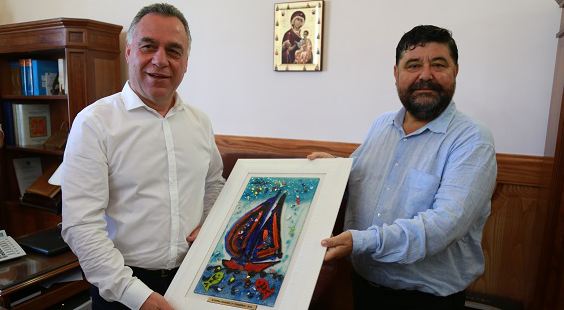 BODTO Chairman Mahmut Serdar Kocadon stated that they are hoping to increase the commercial cooperation between Bodrum and GreeK Kos Island with the recent initiatives. The Bodrum delegation consisting of Bodrum Municipality and BODTO managers, which met with Kos Island Mayor George Kritsis for the joint activities planned on culture-arts, tourism and trade issues, continues to work on this subject with a visit to Kos by Bodrum.

During the visit of the Kos delegation to Bodrum on Friday, June 10th, the subject of " the establishment of a joint secretariat for the important contributions of the two regions to the economy and mutual work in the 2016 tourism season" was taken into consideration again for the real work.

Son Haberler
All
STORIES OF BODRUM
STORIES OF BODRUM
AEGEAN EXPORTATION MEETINGS HAPPENED IN BODTO
WE TALKED ABOUT THE FUTURE OF BODRUM AT THE TOURISM MEETING
BODTO MEMBER RETURNED FROM DUBAI WITH AN AWARD
BODRUM TANGERINE WILL BE ON METRO MARKETS
LELEG ROAD HOSTED PROFESSIONAL MOUNTAINEERS
WE ARE BUILDING BUSINESS DEVELOPMENT WITH INDIA
WE DISCUSSED THE FILM INDUSTRY IN THE INTERNATIONAL ARENA
TABLETS FOR 30,000 STUDENTS FROM TOBB
WE CONTINUE OUR INTERNATIONAL NEGOTIATIONS
OUR INTERNATIONAL COOPERATION CONTINUES
FIRST ONLINE MEETING WITH INDIAN BUSINESS GROUP CHMABER OF COMMERCE
RCIKLIOĞLU ATTENDED THE JOINT MEETING OF MUĞLA PROVINCIAL/COUNTY CHAMBER
EU CHAMBER PAIRING PROJECTS INTRODUCED AT TOBB
TSE OBSERVATION AUDITING
OPPORTUNITIES FOR TURKEY IN THE DIGITAL AGE
INTERVIEWS WITH THE MINISTER OF TOURISM
HİSARCIKLIOĞLU MET WITH SECRETARIES GENERAL
CREDIT SUPPORT FOR SMEs